Living in Harmony with Nature and teaching others to garden the natural (organic) way, with emphasis on practices that lead to NUTRIENT DENSE produce!

Welcome To Our Site

Our intent is simple: to provide useful information on gardening, health and sustainability issues. We will include class and meeting announcements, gardening information, and book reviews. The articles that Calvin writes for Garden Thyme, the Master Gardener Newsletter will be included. We will try to make this site easy to use and relevant.

Harmony Gardens
Fayetteville, Arkansas, United States
Harmony Gardens is the home of Calvin and Doris Bey. As the name implies our goal is to live in harmony with the Laws of Nature. We are concerned about the environment, energy efficiency, organic gardening, alternative health, and sustainability issues. We love our Stitt Energy Systems Inc. energy efficient home, which received a First Place NAHB National Award for 2003. Calvin is a retired USDA Forest Service scientist. Each year he teaches classes in Organic Gardening in February and March and again in September. Doris is a retired RN. Calvin and Doris have put their energy efficient house up for sale (by owner). See first post for description, pictures, and house design.

To understand the basics of growing organic crops, it's necessary to deal with ecological principles. One of those principles, or otherwise referred to as a law of nature, deals with genetic diversity and heirloom seeds.

The central principle on this subject, in a nutshell, is this: the more genetic diversity we have in a garden, field, forest or major ecosystem, the more stable will be that system. We often refer to that diversity as a measure of the buffering capacity of that system to adjust to whatever forces of nature are present. Nature promotes that diversity at several different levels, and for good reasons. Walk into a hardwood forest in this area, and you see trees, shrubs, bushes, herbs, and grasses – all above ground. Beneath the soil surface you see an equally rich plethora of plant and animal life. It's all tied together and functioning for the most ulterior goal of all -- to maintain a sustainable system. Nature is not obsessed with producing bins and bushels, as has been man in gardening and farming over the last century. In each plant class in that same forest, you see a variety of species, and within the species a variety of genotypes (a slightly different genetic make-up.) All of that diversity is important for buffering the system from disaster. Certainly with a natural system, genetic diversity is considered a positive value. When we make selections within a species (as in all crop breeding), we begin to narrow that diversity. We are basically trading off the diversity value for some improved traits.

Obviously, we can't expect to grow crops under the forest conditions, nor can we grow 20 garden vegetables in the same square foot. However, in our gardens, the more crops and companion species we grow (increased diversity), the greater is the buffering capacity to disaster. Grow three kinds of beans, and depending on the season, one will usually do a little better than the others. I suppose since domestication of crops began, we have been selecting plants for a variety of traits – yield, pest resistance, drought hardiness, etc. The hybridization approach was only a more complex way of doing the same thing. The same is true of the gene insertion procedures, to give us the genetically modified organisms (GMOs). Whatever the procedure, the trade-off has been the decreasing of the genetic base, and thus reducing the capacity to resist specific disasters.

The continual narrowing of the genetic base has been a major concern, and from that has come many programs to find plants and seeds from which modern lines were derived, and many seed-saving efforts. The Seed Savers Exchange is a formal effort to find and perpetuate 'lines" of crops that are not found in the commercial ventures today. The "lines" are open-pollinated (free to cross with the neighbors), and anyone can save seed from those lines and grow a like-kind of crop the next year. That in not the case with seed saved from hybrids. They do not breed true. Basically, GMOs are hybrids with special gene insertions. With GMOs, the seed companies own the gene patents, so it is illegal to save and use any seed that contains the patented genes. For GMOs, just as in hybrids, you must go to the company for new seed each year.

In my garden, I mostly use open-pollinated seeds, and in some cases they are heirlooms. Heirloom seed is simply seed that has been handed down in families over many years. Some will refer to heirlooms as seed that was originally collected over 50 years ago. If you grow vegetables, it's likely that you have grown some heirloom varieties. There are hundreds (one catalogue lists 1100 heirloom varieties for sale) and the list is growing as new ones are discovered. If you have grown Arkansas Traveler or Ox Heart tomatoes, Contender bush beans, .Detroit Dark Red beets, Nantes or Danvers Half Long carrots, Late Flat Dutch cabbage, Moon and Stars watermelon, and Golden Bantam or Country Gentleman sweet corn, then you have grown an heirloom line. Many of the lines go back to the 1800s and some even earlier.

Yields and quality from heirloom varieties can be very good. Because there are many unusual types, it is sometimes just fun to plant them for the novelty and education. You don't need 12-foot sweet corn to get good production, but as I showed last month, Country Gentleman sweet corn turned out to be a good choice this year. Through some special soil treatments, I grew this 95-day corn, from planting to initial harvest in 59 days. The cobs were large and the corn had an excellent Brix rating (nutrient dense). I had equally excellent results with the heirloom Detroit Dark Red beets and the Nantes carrots. See the photos.

I encourage you to look in specialty seed catalogues and get some of the heirloom seeds. You will find that you have many choices to select from, and you just may find some tasty varieties, that have been long gone from some of the hybrids. Then, by saving your own seed, you take another step to becoming more sustainable. For good sources to further explore this topic, see heirloomseeds.com, rareseeds.com or seedsaver.org.

Posted by Harmony Gardens at 1:15 PM No comments: 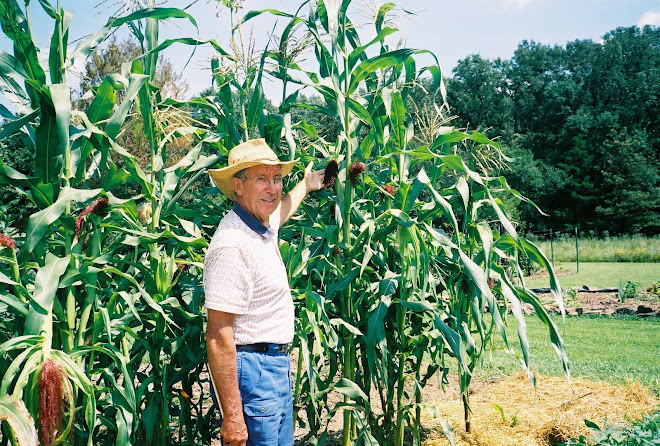